Testimony: A Christian’s Return to Iraq 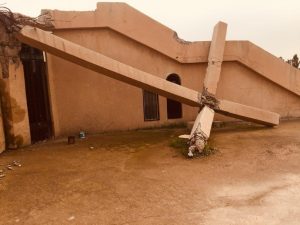 Samir had dreamed of returning to Iraq for many years. He and his family once lived in Northern Iraq and served as missionaries to the people. Samir’s dream was granted, as God opened doors that allowed him to return to the same area he worked in eight years prior.

In 2014 The Islamic State (ISIS), began its brutal seize of Northern Iraq, and seized Mosul in one night. ISIS militants began marking with spray-paint ن (the Arabic letter for “N”) on Christian homes and businesses. The marking signified that a Christian or “Nasrani” or “Nazarene” lived here. The message was loud and clear — convert, pay a tax, or be killed.

Much blood was shed at the hands of those who vehemently oppose “The People of The Cross.”  During Samir’s visit he witnessed firsthand the scars that now mark the land and the destruction left behind by evil men. Church buildings where  large concrete crosses had been removed, and walls destroyed by gunfire. In other areas there were tunnels used by militant fighters to infiltrate villages and inflict terror upon its inhabitants.

The people are now re-building their lives and communities and their places of worship. Christians are returning to find the church buildings destroyed. Homes, businesses, and entire communities decimated.

While evil can bring destruction to the building — it can never destroy the church.

“And I tell you, you are Peter, and on this rock I will build my church, and the gates of hell shall not prevail against it,” Matthew 16:18.

The reign of terror in Northern Iraq has traumatized and scared the hearts of her people. The good news — we serve a nail scarred savior — who is redeeming the times and spreading His love through those like, Samir.

Pray for the people of Iraq and those who are bringing relief and the good news to this area.