Before Rama got saved, she felt depressed and went to see someone. This person claimed to be a healer who would work with angels to help her. Rama believes she came under a curse because of this this, and started seeing terrifying visions. She felt darkness and terror everywhere she went. Finally, she told a close relative about what she was experiencing, and the relative brought her to an evangelical church. 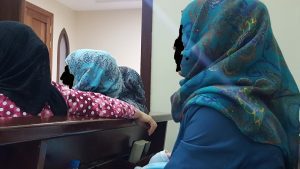 The Pastor gave her a Bible and began praying for her in the name of Jesus. She felt the evil leave her. She heard the gospel and received Jesus Christ as her Savior. Now, she serves in prison ministry and Sunday school.

When her parents saw the change in her, they wanted what she had too, and soon also accepted Jesus. Rama’s story is unique for her cultural background, because for many, converting to Christianity means being shunned from society and kicked out of their family.

At a recent conference for women’s ministry leaders, the women were asked to tell others about their families. Rama said that she had no children and lived at home with her parents. Later, she thoughtfully refined her answer. “I do not have any biological children, but I have six spiritual daughters, women who are prisoners in the town jail, whom I minister to.” Rama’s God-ordained ability to give life shines through when she speaks about the discipling she is doing in a women’s prison ministry under the blessing of her church. Of the ten Muslim prisoners she has built a relationship with, nine have accepted Christ. Three of them have been released from prison, and she is still discipling the other six prisoners, whom she considers spiritual daughters.

Rama’s story is one of God’s grace, love and the power of prayer.

She is praying for the Lord to expand the boundaries of the church so that more people can come to know Jesus. She desires for her women’s ministry to grow, so that women can have a godly influence on their husbands, children, and society.