TESTIMONY OF EYAD: I know Jesus healed my son

*Names has been changed for the safety of our brother 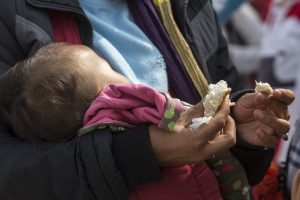 Idomeni, Greece – September 24 , 2015: Hundreds of immigrants are in a wait at the border between Greece and FYROM waiting for the right time to continue their journey from unguarded passages

THE TESTIMONY OF EYAD: I know Jesus healed my son

Eyad and his wife had a baby boy, their first child. When he was born, his tonsils were too large and it was difficult for him to breath. He would not sleep normally and would gasp for air; they were always watching him to be sure he didn’t stop breathing. The boy’s tonsils would become infected 3 or 4 times a month and his temperature would rise over 40C. Eyad would take him to the doctor and, even in the middle of winter, they would take off all of his clothes and use ice water to bring down his temperature. The doctors told Eyad and his wife that their son needed surgery to have his tonsils taken out. But Eyad was afraid. The doctors told him it was an easy surgery and didn’t understand why Eyad didn’t do it. But the boy was his first child and he was so afraid. Eyad’s mother told him not to do the surgery, saying something might go wrong.

One night during the summer when it was so hot, Eyad came to bed late and found his wife weeping because their son was suffering so. Eyad touched his head and it was very, very hot. He told his wife to bring some ice so they could try to get his temperature down. When she went to get the ice, Eyad remembered Jesus.

Eyad had heard about Jesus and believed…but not completely. He put his hands on his son’s head and throat and prayed: “Jesus, will you accept us? I believe in you, but not completely. I cannot lie to you because you know. If you exist and you are there, we are your sons. You can see my son’s situation. I will not tell you what to do; you know better than me what to do.” Eyad prayed.

In less than 3 or 4 minutes, his son was so cold that Eyad thought he was dead. He woke him up and asked him if he was okay…how his throat felt. His son said he was okay and went back to sleep.

When Eyad’s wife returned with the ice, Eyad told her their son was okay and they didn’t need to do anything. From that time on, his tonsils were no longer so large; they got smaller and smaller. Now he is 11 years old and everything is normal. He has had no more problems.

Eyad’s mother said, “I told you…” But Eyad knows better than her what happened. When Eyad told his wife what happened, she said it was just chance, not because of his prayer. But Eyad knows that Jesus healed his son. And day by day, he keeps showing Jesus to his wife wanting her to believe, too.

PrevPreviousMINISTRY SPOTLIGHT & UPDATE: Christian School for Children
NextA WORD FOR YOU: When My Body SuffersNext