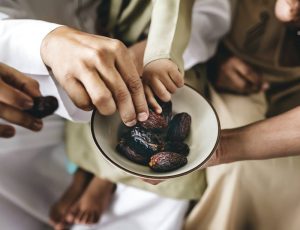 Sitting on cushions late one hot evening in a small unfurnished room in their apartment, we were introduced to Karam and Iman and our hearts were stirred as we heard their testimony, studied the Word of God with them, prayed together and enjoyed their gracious and generous hospitality. Their journey of life and faith gives clear testimony to our Lord’s amazing love and grace and faithfulness.

Karam, who speaks English, works at a television station in Iraq. He and Iman are newly married, just 1½ years. They are both originally from Syria…a Kurdish town destroyed by the war and ISIS. But the work of the Lord began in Karam’s life many years ago, when the city they originate from was still at peace…though Karam’s heart was not.

As a young Muslim man, Karam spent $2 and purchased a Bible. He didn’t know what he would use it for, but he bought it anyway. He started reading it and in the Bible was an email address you could write to if you had questions or needed any help, so he did. He explained he was Muslim and wanted to know about this man, Jesus, who did miracles. Over the next two years, they sent books and provided answers to Karam’s questions. Then, after two years, they encouraged Karam to travel to a nearby city to meet with a man. He decided to go and this man spoke to him about Jesus and salvation. At the age of 16, Karam put his faith in Christ and then began to share with his family and friends about Jesus. His family resisted at first and did not want Karam to believe or to tell anyone he was changing his religion. There are often problems if people hear you have changed your religion; in Karam’s culture, they can kill you. This is what they have been taught in their religion; they have no other way to process what you are doing. They will not do it openly, but will often find a sly way to harm you. But Karam doesn’t blame them. He understands they are following the book of their god. He explained to his family that the Bible teaches not to lie or kill or say wrong things or do bad things to others, and if they killed him it would not be because he was doing anything bad because the Bible was teaching him to be a good man. In time, his family accepted the gospel message.

Karam’s life has taken many turns since he put his faith in Christ. He studied and over the next several years and traveled to Algeria, Morocco, Spain, Lebanon and eventually Dubai. He settled in Dubai for 10 years. And then moved to Erbil just two years ago.

Iman’s story is rather different. Since his wife doesn’t speak English, Karam continued to tell her story. After they met, Karam began to share Jesus with her and Iman began to put her faith in Jesus also. After 6 months of courting, Karam wanted to ask her parents for her hand in marriage. Since he did not live in Syria anymore, Iman’s parents began asking many people, “Who is Karam?” They asked more than 100 people and some of them said that he was a Christian.

When Karam went to speak with Iman’s parents, they said they were so happy he came and they had only one question…“Are you Christian?” And in that moment, Karam thought of Peter in the Bible. Would he say “yes” or “no”? Would he deny His Savior? If he said “no”, he would be like Peter and the Lord would not forgive him. If he said “yes”, they would not give him their daughter.

Karam said, “Yes, I am Christian. What is the problem you have?” He asked them to tell him what is wrong with being Christian. If they could tell him what is bad about it then he would leave Jesus. Iman’s parents said they did not think it was bad. They said it was okay and asked when they would like to be married! Karam saw God’s blessing in his life and he was reassured that when we do things God’s way, He will cause things to happen.

For Iman’s parents, though, this was a very difficult thing. They were allowing their daughter to marry this man who came from a distant place and to change her religion. This was not easy for them. But God was at work to accomplish his purposes. As Karam reflects on the events, he knows “God was with me” and, at the same time, God was asking him to deny himself and take up his cross and follow Jesus, trusting Him for everything. Since their wedding, Iman’s father has asked Karam for a Bible and her parents are reading it! O the power of our God…so much greater than we can imagine.

Karam is careful at his work not to offend his Muslim co-workers. He is respectful of them during Ramadan, not eating or drinking in front of them and even fasting with them at times. But, while his co-workers are not happy while they are fasting, Karam sets a different example. He is happy to sacrifice for his God. So he slowly and carefully shares Jesus with those around him, showing Jesus by his life. Karam knows that where he lives he is not free to tell his neighbors about God; and maybe they know they need God but they aren’t free to ask him what makes him different. Yet God’s kingdom goes forth.

Karam sees how God is at work in his life, His protection, and the miracles He does for him. And if God does that for him, Karam knows He can do it for others too. Karam is living out the very scriptures we studied together that night – John 3, Matthew 22 and Luke 9 – living a life that looks like Christ, a life that looks different, willing to lose his life so that he might save it. “For whoever wants to save his life will lose it, but whoever loses his life for Me will save it.” Luke 9:24 And so our hearts were stirred.

Do I have faith to believe, as Karam does, that losing my life and putting complete faith in Jesus actually means saving it?

*Names and places were changed for security reasons