Testimony: A Westerner’s Look At Ramadan 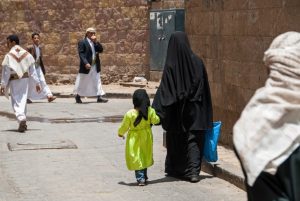 While They Pray, We Pray

I will never forget my introduction to the Middle East. I had gladly accepted an invitation to visit and envisioned meeting those who called this country home.  I remember my view from the airplane window as we began to descend on the city lights below. This would be my first visit to a Muslim majority nation.

My luggage was not all I had brought with me on this trip. Sadly, I had also taken along my preconceived ideas of Muslim people.  My perception of them was formed and shut up tightly; within the framework of my western understanding. Once there my senses were immediately overwhelmed.  Seeing what often appeared to be a sea of beautiful women covered from head to toe in traditional Islamic dress, called hijab and niqab. Hearing the sounds of the Adhan, or call to prayer, from Mosques that seemed to blanket every area of the city. It was a new experience for me, and one I would eventually fall in love with.  A place I would come to know as “my heartland.”

We arrived during the Islamic Holy month of Ramadan.  It is during the month of Ramadan that Muslims rise early to eat before the sun is up, followed by fasting and prayer until the setting of the sun.   For followers of Islam the fast of Ramadan is a high form of worship and one of the five pillars of their faith.  With a desire to greet Muslim people; my first Arabic words learned were that of a Ramadan greeting. The phrase consisting of two simple words was the bridge I used to cross our cultural and religious barriers. I loved watching eyes brighten as I exchanged smiles with Muslims people for the first time in my life.  Of course there were also Muslims whose faces showed their disdain for me. My love for them is blind; I only see people God loves enough to give His life for. A people He is paying personal visits to all over the world today. He is meeting them in dreams and visions, and through the love of those who will be His hands and feet. I found myself drawn to prayer as I looked through the lenses of my fear, misunderstanding, spiritual attraction — and a love bigger than me. With each call to prayer I heard announced from the mosques that surrounded us —I also prayed.  I watched men standing in the trains we shared chanting Quranic verses — I prayed for them too.

I found myself surrounded by a people I feared — and loved. Unbeknownst to me God was calling me to this desert land and the sons and daughters of Ishmael.

As is customary we were assigned Muslim guards to travel with us while in remote areas of the country. They became our travel companions as we visited house to house in poor villages. We were honored to be invited into the homes of Christians in these remote villages. Over steaming cups of tea, and through the voice of our interpreter we shared with them our love of God.  I remember one such visit on a very hot day. I watched our guard dutifully following his Ramadan fast including avoiding drinking or eating under the 100 degree desert heat. It was during this visit that a member of the family whose home we were in asked me why I follow Jesus. I was given the perfect opportunity to share my love for a God who first loved me. Weaving into my story the truth of a Savior whose love and acceptance I can never earn.  Our guard looked away while he listened intently. I pray that was only the beginning of this man’s encounter with God.

In areas of the world where Islamic Extremism is alive and well, the month of Ramadan can turn up the furnace of Christian persecution. Let’s remember our Christian brothers and sisters in prayer and seek God for our part in serving alongside them.

Remember those in prison, as if you were there yourself. Remember also those being mistreated, as if you felt their pain in your own bodies. Hebrews 13:3

Ramadan is the ninth month of the lunar Islamic calendar, and begins on May 5th and ends on June 4th this year.  While Muslims fast and pray with hopes of encountering God, — we too, can pray this for them.  It’s a great time to pray for God to reveal Himself as they are seeking.

“Behold, I stand at the door and knock. If anyone hears My voice and opens the door, I will come in to him and dine with him, and he with me. – Revelation 3:20 NKJ

We live in a day where more Muslims are coming to faith in Jesus Christ than any other time in history.  I have a friend who is a Muslim Background Believer. He once said something to me that I’ll not soon forget. He posed the question – “what if Muslims all over the world are being visited in dreams and visions by Jesus because we are too afraid to go to them?” In many parts of the world today our persecuted family is boldly sharing the love of Jesus with their Muslim neighbors — even when doing so carries with it a high price.

In God’s grace He has brought the mission field to our backyard. It is no longer necessary to board a plane to extend the love of God to Muslim people — they are now our neighbors. My prayer is that we — the followers of Christ, would venture across the divides of difference and share the love of Jesus with our Muslim co-workers, neighbors, friends, and strangers.

~ The key is the personal touch. The Muslim culture is an Eastern Culture, not a Western one. It is based on relationships and storytelling and on people spending long periods of time with one another. People in Eastern cultures are not so worried about schedules and quotas and sales figures and returning emails and phone calls quickly. They are interested in personal contact. They are interested in firm handshakes and good food and strong coffee and sweet tea and looking in a man’s eyes to see if he is a good man or a bad man and whether he can be trusted or not. –  Inside the Revival by Joel Rosenburg.