A Word For You: Failing Algebra and The Gospel 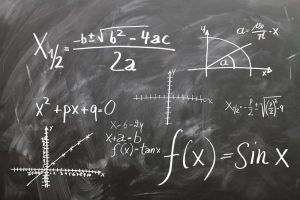 It’s been 27 years since I was in high school, and I still haven’t used Algebra. Not once; which means my bad Algebra grades don’t mean a thing, right?

Well, not exactly. I now have kids in high school who struggle in Algebra too.

When they bring home their failed tests and horrible quiz grades, it would be really nice if I could lecture them. It would be nice to tell them to buckle down and do the homework and get the grades up. But I can’t. Want to know why I can’t?

Because they know they are still getting a better grade in Algebra than I had.

When I was in Algebra, yeah, I always had my homework done, but that was mostly because it took me all of 7 minutes. I spent very little effort on Algebra. I have no moral ground to stand on to deliver a first-rate lecture to my kids about doing well in Algebra.

Several times I have met Christians who console themselves that their sin is OK because “God is gracious. I don’t have to fight sin; I’m already forgiven.” These same people also tend to wonder why they can’t convince their family members or friends to believe the Gospel.

One reason to fight your sin is because of your testimony. Now, it’s not the only reason, but it should be one of the reasons.

The Apostle Paul was concerned about the reputation of the ministry. He knew people were watching him, and his handling of life was going to influence people’s reception of his preaching. Paul says in 1 Corinthians 6:3, “giving no cause for offense in anything, so that the ministry will not be discredited.”

You may not like it that people are watching and judging you, but they are. It’s what people do. If our lives are not backing up our message, our message becomes ineffectual.

This is true for those who represent the Gospel, just as much as it’s true for a guy who took Algebra 2 twice. People watch what we do and use that to determine whether to listen to what we say.

I have no moral ground to lecture my kids on their Algebra grade, but luckily for them, I married a smart woman; a woman who aced Algebra. I let my wife do the lecturing in this department.

Ultimately, Jesus Christ is the one we point people to. He is the ultimate, perfect example. This, however, does not mean His people can flail around in sin and think that we are pointing people to Christ.  It doesn’t work that way.

What we do matters. Sin is a big deal and needs to be fought daily for many reasons. One big reason is so people can see the light of the world shining in us, as it may be one of the few lights in their darkness.

“Let your light shine before men in such a way that they may see your good works, and glorify your Father who is in heaven” (Matthew 5:16).

Pray for the work of the Spirit to put to death the works of the flesh and produce in you the fruit of the Spirit.

Pray for an awareness of your own sin and the power to do battle with it.

Pray for opportunities to share the Gospel of Jesus Christ.